Optimise for RankBrain with structured data

Google processes over one trillion searches a year and around 15% of those queries it had never seen before – enter RankBrain, Google’s artificial intelligence ranking engine.

In Oct 2015 Google announced, via an interview with Bloomberg, that it has integrated an artificial intelligence engine named RankBrain into their main search algorithm Hummingbird and this has become the third most important ranking factor, making it a crucial area for SEO. They didn’t point out what the top two ranking factors were, but it’s mostly to be links and content (words) on the site.

The main objective of RankBrain is to better understand the intent of a search and to provide better results for the 15% of searches they’ve never handled before. So a good understanding of RankBrain is crucial for high performing SEO. Prior to RankBrain the search algorithm mainly contained methods which all stem back to human intervention, such as creating synonym and stemming lists, relationships and connections to deliver better results.

How to optimise for RankBrain?

To give RankBrain what it needs, sites need to utilise structured data extensively. In the past, sites could get by without marking up their content, but with the introduction of RankBrain and the increasing use of rich snippets in the search results, it can no longer be left on the SEO subs bench, it needs to be promoted to the A-team.

As well as improving your rankings with the use of Structured Data it can also mean rich snippets are displayed in the search results which can make your site stand from the rest. See below. 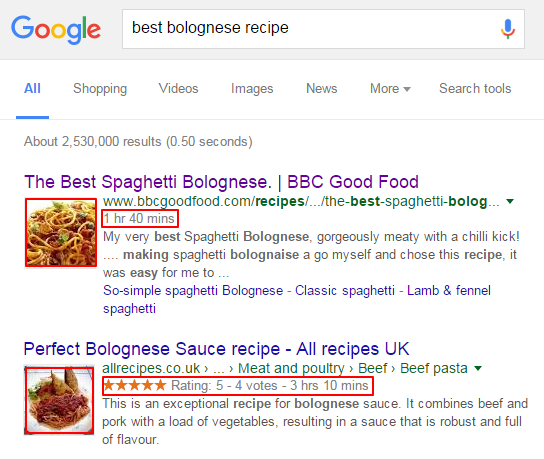 The facts for SEOs

The issue with Accelerated Mobile Pages (AMP) is you will probably have to maintain two code bases for your site, which for most, is cost prohibitive. Whatever the take-up for AMP, it’s another sign that Google is giving added weight to the load speed of mobile sites as one of their ranking factors, so it’s time to get serious about SEO for mobile search and mobile users.

What are the web browsing differences between mobile and desktop?

Most mobile users browse in a portrait and desktop users in landscape. For this reason mobile design should be given appropriate consideration at the design stage of a project. Despite the massive and increasing use of mobile devices for browsing and shopping online, mobile design is not getting the attention it deserves and is often an afterthought and something that just happens last thing before a site goes live. For SEO purposes, ensure you have a well-optimised, responsive web design.

Our third SEO tip has cross over with our first two. As you might expect, voice search is increasing in-line with mobile usage and is will continue to do so. To optimise for voice search we first need to consider how it is used. It’s often used for direct questions like ‘What is a habanero pepper?’ or for local searches like ‘Show me a rock climbing wall nearby’. You can also use follow up questions, so you can then say ‘Show me directions there’, ‘What time does it open?’.

How to optimise your SEO for voice search

The image below shows rich snippets along with an additional related questions panel which further supports the need to focus on long tail questions your users might have for SEO.

The most significant SEO factors are the introduction of the RankBrain AI as the third most influential ranking factor and the increasing dominance of mobiles for search and online shopping. The ways we can optimise SEO for these are to make our mobile sites as fast as possible and design specifically for the mobile user to increase conversion rates. Make extensive use of structured data to feed RankBrain and Google Knowledge Graph what it needs to provide targeted voice and desktop search and look at provided specific content to users questions.

Find out more about our digital marketing services

Looking for a SEO agency you can trust?

If you want a more holistic approach to your SEO and overall search marketing strategy then please get in touch to arrange a meeting at our Cheltenham or London offices.
info@sozodesign.co.uk
01242511912

Looking for a digital agency to become your long-term partner to help your business succeed online?

We use cookies on our website to give you the most relevant experience by remembering your preferences and repeat visits. By clicking “Accept”, you consent to the use of ALL the cookies. However you may visit Cookie Settings to provide a controlled consent.
Cookie settingsACCEPT
Manage consent

This website uses cookies to improve your experience while you navigate through the website. Out of these cookies, the cookies that are categorized as necessary are stored on your browser as they are essential for the working of basic functionalities of the website. We also use third-party cookies that help us analyze and understand how you use this website. These cookies will be stored in your browser only with your consent. You also have the option to opt-out of these cookies. But opting out of some of these cookies may have an effect on your browsing experience.
Necessary Always Enabled
Necessary cookies are absolutely essential for the website to function properly. These cookies ensure basic functionalities and security features of the website, anonymously.
Functional
Functional cookies help to perform certain functionalities like sharing the content of the website on social media platforms, collect feedbacks, and other third-party features.
Performance
Performance cookies are used to understand and analyze the key performance indexes of the website which helps in delivering a better user experience for the visitors.
Analytics
Analytical cookies are used to understand how visitors interact with the website. These cookies help provide information on metrics the number of visitors, bounce rate, traffic source, etc.
Advertisement
Advertisement cookies are used to provide visitors with relevant ads and marketing campaigns. These cookies track visitors across websites and collect information to provide customized ads.
Others
Other uncategorized cookies are those that are being analyzed and have not been classified into a category as yet.
Save & Accept